What Does It Mean?

360 Orthopedics Blog What Does It Mean? 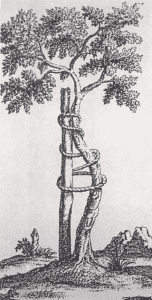 We are often asked about the significance of the tree in our logo.  Truth is, we are paying homage to the medical field of orthopedics. The crooked tree symbol was first used as an illustration by Nicholas Andry in his 1741 published book on orthopedic medicine. Since that time, it has become the symbol of our profession.

The word “orthopedic” stems from the Greek roots, “ortho” (meaning straight or free from deformity) and “Pais” (meaning child). Early orthopedists would brace or splint young children so they would grow upward, strong, and straight.

Many people think of orthopedic physicians as  primarily treating broken bones.  We are so much more than that!  We deal with the prevention or correction of injuries not only to the skeletal system,  but the associated muscles, joints, and ligaments as well.  We’ve come a long way in technology and knowledge from when Nicholas Andry first drew that bent sapling which has stood the test of time.